Fritz Jäger with Other Officers of the Wehrmacht 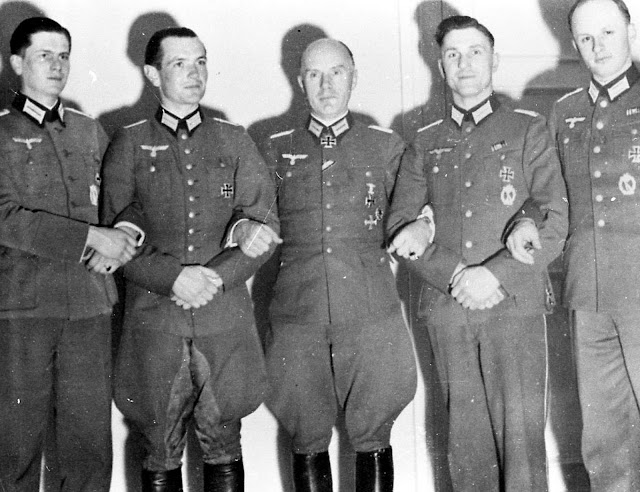 Oberst Friedrich Gustav "Fritz" Jäger (center) with other officers of the Wehrmacht. He display a rare combination of Lippisches Kriegsverdienstkreuz II.Klasse (ribbon) and I.Klasse (medal below the Eisernes Kreuz I.Klasse spange). Fritz Jäger received the Ritterkreuz des Eisernen Kreuzes on 26 May 1940 as Major and Kommandeur II.Bataillon / Infanterie-Regiment 8 / 3.Infanterie-Division. He was a resistance fighter in Nazi Germany and a member of the 20 July Plot. On 20 July 1944, the day of the attempt on Hitler's life, Jäger was commander of the Panzer reserve troops in defence districts II (Stettin) and XXI (Kalisch). After the briefcase bomb exploded at the Wolf's Lair in East Prussia, Jäger received orders from Claus Schenk von Stauffenberg to arrest an SS Oberführer. Furthermore, he was also to arrest Joseph Goebbels and occupy the radio station in Masurenallee. After it became known that Hitler had survived the attempt on his life, however, the soldiers under his command would no longer take his orders. Jäger himself was arrested by his own army on the same day when the plot failed. On 21 August 1944, Friedrich Gustav Jäger was sentenced to death for treason by Roland Freisler at the Volksgerichtshof, and he was hanged later the same day at Plötzensee Prison in Berlin. His family's property was confiscated.