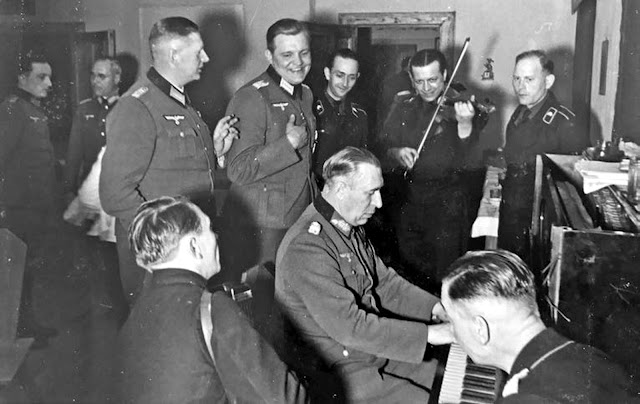 Generaloberst Rudolf Schmidt (Oberbefehlshaber 2. Panzerarmee) playing piano at his farewell party in Orjol, Russia, 4 March 1943. In 11 April 1943 he would be replaced by General der Infanterie Erich-Heinrich Clößner, having openly criticized the general conduct of war. He was transferred to the Führerreserve and was to be responsible for the Reichskriegsgericht (Reich War Tribunal). His brother had been arrested for treason, and the discrediting letters from the Generaloberst was found with him. However, Schmidt was not condemned by the Reichskriegsgericht. Generalstabsrichter Karl Sack recommended the admission to a psychiatric institution. He later attempted to be brought back into active service by Himmler's recommendation, but Hitler rejected this request in September 1944. In 1947 he was arrested in the Soviet occupation zone. He was then brought to Russia as an alleged prisoner of war. There he was condemned to death, but later pardoned. It was not until the winter of 1955/56 that he returned to his homeland... as one of the last prisoners.